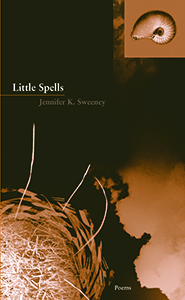 Little Spells explores the paradoxes of fertility from the circle of self to a larger study on restraint, the creative force, not-being, and bounty making. It is both a personal and an existential meditation, calling upon myths, folklore, fairytales, and natural phenomena to explore the scope of what slim margins all life leans on, what rough spark we depend on every day to keep going. Much has been written on the ‘gates of death’ but perhaps less on what guards the ‘gates of life,’ and this collection is most concerned with threshold, potential, conjuring, from many different entry points to speak more universally about how we become and how we endure a stalled narrative. It is the poetry of dark beginnings, of waiting, being suspended at the crossing; the work of everyday magic, loss, and bounty.

I wrote this book during a six year period defined by desire, rootlessness, and deep quiet in my life. I lived in San Francisco and Michigan and then LA’s inland desert, I was very much wanting to have a baby and that had become nearly impossible though through great struggle, it did finally happen. I didn’t want to write about the difficulty of that, didn’t want that to be my narrative, but eventually it did present a certain narrative, and I wrote around it and into it and beyond it. I wrote with directness into the silence of infertility that is often treated cryptically in literature or with blame and lack toward women. I wanted to humanize this and demystify it, but I did not want the reach of the book to be limited to my experience. Drawing on myth, medicine, fairytale, were all ways in and ways leading out of the dark forest. Subject for this book is so personal, and yet through writing, the gravity of that was also transformed.

“Little Spells” was one of the last poems I wrote for the book. I think many books are led by a tremendous “what’s-at-stake” energy, a guiding force that is so engrained in the poet, she sometimes takes it for granted and doesn’t actually write THAT poem. Finally, this integral missing piece poem tumbled out, the previous flailing titles fell away, and the book landed into place. What I most wanted the title to suggest were the spells that ferry us over the daily crossing by our own personal magic. Mundane, necessary, ordinary, saving magic.

It was difficult to live this story, and it was difficult to pull myself out of the sustained and blurry grief of it, and locate art, make art that had a lasting impulse. Process involved a great deal of chaff. The circle of self was so tightly coiled; writing was a continual crowbar creaking it open and it was raw, uncomfortable, risky, and essential.

When I first began writing seriously fifteen years ago, I noticed a tendency in my poems toward the urge for disappearance—something Jane Hirshfield and Sandra Alcosser have also alluded to in their early writing lives (why did I feel like nothing? why was I continually led back to vacancy, disappearance, self-erasure?)—I think many of us have written ourselves out of that adolescent-sprung place into being, perhaps one of the initial impulses behind the act. Conversely, in this third book, I felt the quality of disappearance in my own life as I struggled with the repeated intention: mother, and the repeated answer: not-mother. I felt my 30s drifting past me, my sense of home kept shifting, but this time the poems sent the golden feather down to the well and continually resisted that sway toward plunge and hollow. Was this pleasure? Yes, resistance and willfulness as a kind of pleasure.

Best: Not writing but applied to writing: living in San Francisco in my 20s, I threw myself into an intense Zen study. The Zen teacher sat across from me one day and said plainly, “Don’t try too hard to be good at Zen,” and left the room. This was somewhat lost on me at the time, dutiful student of everything. But I get it now. Let the effort be natural. Don’t push too much. Live the curious, messy, sensing-feeling poet’s life. Enjoy that.

So many! But I would love to swoon about Blood Lyrics by Katie Ford. This is also a book about dark beginnings as she writes about her daughter born prematurely and struggling toward health alongside others in the tenuous and often terrifying NICU.  That fragility and intimacy is positioned against the public as the second half of Blood Lyrics addresses war, violence, and torture. Both subjects seem extraordinarily difficult to write about, yet Katie Ford is so deft, restrained when restrained, fierce when not, the poems are nuanced, surprising, and musical.  To plea for a baby’s life alongside her, then to weep for a people ravaged by violence, these are poems that mean and matter. I so admire this collection, what she accomplishes and how she does it.

--Can you discuss the process for one of the poems in the book?

I have a section-long poem called Still Life With Egg that is a variation on a heroic sonnet crown—a series of fourteen linked sonnets such that the whole is its own “expanded sonnet.” That is where the writing landed but it’s not what I set out to do.  I was led in quietly, a fragmented nudge into egg as both artist and art object. Then came nest, clock, hollow, return, thought, source.  After each one, it wasn’t done with me. This was one of the most harmonious memories I have of writing, calmly sitting with a week off and nowhere to go thinking, well then I will write another, which is to say it was much more like listening, and that is how I know I am really in. First I realized I had written a series of twelve which was cute, my little dozen, but then there was another and finally one more.  They were all about the same brief length, and I began working with form as I revised, and a loose kind of sonnet-shape/sense emerged and then as a whole, “the crown.”  This was one of the first poems I wrote for this manuscript and it ended up being oddly prophetic—what was the fascination with eggs?—when the struggle to conceive one viable egg of my own was waiting for me in the future. I feel as if I have been having the egg dialogue both consciously and unconsciously for about ten years.
Can you share an excerpt from your book? Give us a taste.

from STILL LIFE WITH EGG

to move backward in time
a slow motion unbraiding

of threads and language
receding toward mother and beyond mother
seed return to cloud, cloud return to sea

a downward push toward the question
of water, the numbers fall off the clock 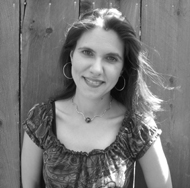 Here is the page for Little Spells at New Issues Press with blurb comments, sample poem, bio, and links to buy directly from the press, or from SPD, Barnes and Noble, and Amazon. http://www.wmich.edu/newissues/titles/sweeney-littlespells.html