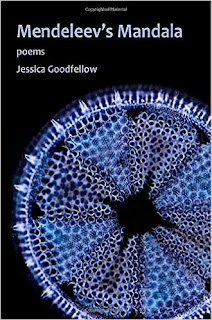 Where would a Buddhist monk, Iphigenia, and Isaac Newton cross paths? Why would Sarai of the Old Testament write a letter to 17th-century mathematician Leibniz? What do Wilbur Wright, Remus, Romulus, and Wittgenstein have in common with a fortune teller? What does Schrödinger’s cat know about the blues? Kilroy was where? For the answer to these and other questions, read my book.

I was raised in a religious family, but was encouraged to study analytical subjects in school. To balance those influences—trying to be appropriately loyal to both—as a young person I developed a bifurcated worldview as a sort of coping mechanism. One of the tasks of my adulthood has been to try to make a cohesive story for myself without having to jettison too much of my varied and competing experiences.  This book is part of that doomed project.

The book title is also the title of a poem in the collection. I selected it mainly because I love the sound. But it also happens to embody the theme of the book, the balancing of different worldviews. A traditional mandala strives to represent the entirety of the universe in a single picture, while Mendeleev’s periodic table is an organized list of all the known elements in the universe—making it a sort of mandala based on science, on reason.

Identifying the themes of this book was difficult. My other book and chapbook were theme-based by design from the get-go, whereas with this book I discovered the themes midway through the writing process (or more like two-thirds of the way through). It was hard writing from poem to poem, trusting that my unconscious mind had some design I couldn’t access, rather than proceeding as part of a cohesively conceived project. But the book may be (hopefully is) richer for it.

The most pleasurable part of this book’s journey was when Motionpoems selected a poem from the book, “Crows, Reckoning,” to be made into a short film by L.A.-based studio COMMANDR, under directors Edward Chase Masterson and Alex Hanson. It was thrilling to see their interpretation, which added layers of meaning rather than portraying exactly what I had written (much like a successful Japanese haiga, which is a combination of a haiku and visual art, and which is considered most successful when the two elements do not directly represent the same imagery, but go deeper or add to the other). You can see that short film here:

Someone once told me that my writing was too eclectic, that I varied my style too much from poem to poem. A bit of a dilettante, she called me (though kindly). I have to respectfully disagree. While my use of form may vary widely (and even push the boundaries of what is considered poetry), it always serves the theme of the poem. Always. I don’t make choices about form gratuitously. And there is an underlying sensibility that does unite my work, even when I allow voice and tone to vary between poems. The variation and the experimentation are not there without a purpose. I know that, for many people, not having a distinct voice is considered a tell of immaturity, and that may be true in some cases. But it’s not always true: sometimes the unifying voice is there, though disguised in service of the poem.

Earlier this year I read artist and writer Karen Green’s Bough Down, a book chronicling grief after a husband’s suicide, through small (visual) collages and written fragments that taken together approach a lyric essay. The smallness of each piece mimics an interior world that has been devastated, shredded to a manageably-sized scrap that still isn’t manageable. This book deviates from normal forms to recreate an experience, which is what form is supposed to do, crushingly.

Can you share an excerpt from your book? Give us a taste.

Burning Aunt Hisako                 (originally published in diode)
Afterward we sifted through her ashes
with long chopsticks—one bamboo
and one willow, for this life and the next.
The furnace-keeper lifted bone by bone.
“Her ankle bone,” he tendered. “Her left thumb.”
A plate-shaped bone he named “her face,”
just before he smashed it into pieces
small enough to drop inside a dull bronze urn.
“What are we looking for?” I whispered
as we sifted. “From her throat, a bone
that’s said to hold a seated Buddha.”
From Adam’s rib to this, does at least one bone
from every body belong to someone else? Never
mind—what use are their own bone Buddhas now,
to Aunt Hisako smoldering on her slab,
to my mother’s father sealed beneath a hard
and glittering snow? Bits of mica, memory
of fireflies—my own hand on my own throat—
of what use is this thirst for things
resembling other things, this endless trying
to wring milk from a two-headed cow.

I like to be asked about the cover of my book. I wanted something that both resembled a traditional mandala and also appeared somewhat scientific. I looked at so many images of various arrangements of the periodic table of elements (to reference Mendeleev, whose table is the one we use today), including circular ones (to mimic a mandala), but they weren’t quite right.
Then I stumbled across Nikon’s competition for photography of microscopic images, and I found a world that was both mandala-like yet with a scientific edge, and I knew I could find what I needed. (Check it out—so many stunning images! http://www.microscopyu.com/smallworld/gallery/.)
Eventually I settled on an image of a diatom (a microscopic single-celled algae with certain characteristics) that can be found in the public domain. My publisher tinted it purple and rotated it for the cover, and I had my mandala that evoked both ancient wisdom and modern science.

Buying directly from the publisher is the best to way support the press and get most of your money into the hands of people who support poetry. So here’s a link to that: